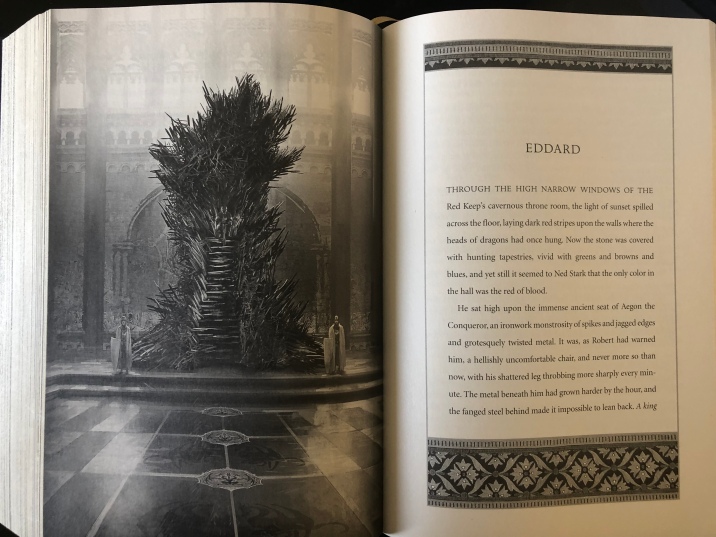 So, I’ve finally completed the A Song of Ice and Fire (ASOIAF) series.

After about 2 years of owning and not opening the first book, and about one year of owning a beautifully illustrated copy gifted to me by some wonderful friends – you know who you are – I finally decided to buy the entire series so far and started reading it in about November. After several months of pretty dedicated reading on my commute to and from work, I finished in late May and can now officially count myself amongst the many book fans waiting (patiently, or not so) for the final two books. In however many instalments.

If there’s anything I want to get across in this post, it’s that the series is so entirely worth reading regardless of its current “incomplete” status. I know a lot of people are putting it off because they don’t want to wait, or because the series might never actually get finished, but why put off a good thing, right? And if like me, you are a show-watcher turned theory-lover, then definitely go for it.

Now, given that I only finished the series a month or so ago, and haven’t experienced an almost decade long wait for the next book – the most recent book was released in 2011 – I can’t say I won’t get to a point when I start to feel frustrated. But I can say right now – before the bitterness of what could be a long wait sets in – that I enjoyed every moment of reading the books. Even with the anxiety that came when certain “unpleasant events” drew near. You know the ones.

I really enjoyed and appreciated gaining new knowledge and insight about the characters I knew and loved from the show, and that’ll stay true regardless of what happens with the books in the future.

The first thing I liked about reading the series is that it refreshed my memory of the show. It allowed me to reminisce about moments I loved, and to get a better grasp on the story at large and the series of events. A lot happens in the show and so it was easy for me to miss details, like names and plot points. Reading the books allowed me to really appreciate and absorb more of the story. And it’s a great story.

And on top of reinforcing details, the book series has so much more detail and depth than the show. Especially as the books progress. The added storylines and characters and perspectives only make the story more interesting in my opinion. With so many moving parts I have no idea how George R.R. Martin (GRRM) keeps it straight in his own head, but I do know that it’s bound to make witnessing how the chips all fall into place at the end, that much more exciting.

The books also provide so much more character insight than the show can achieve, given the point of view (POV) nature of them. You can learn a lot about a character given good writing and a good actor, but it can never compare to actually being in that character’s head. Though I suppose there’s an argument to be made about unreliable narrators.

[SPOILERS AHEAD] – Spoilers for Daenerys’ story in S04E08 (A Storm of Swords in the books), in the next paragraph. The one after is just general discussion about Cersei’s character, but skip it if you want to be careful. Or, if you just hate her that much.

There’s one scene in particular that really highlighted for me, the benefits of POV. It was the scene when Daenerys, aka Dany, was banishing Jorah for spying on her. In the show, as Dany is questioning Jorah about his betrayal, she makes a point of not looking at him. Now, the attentive watcher (i.e. not me) probably noticed and deduced that Dany’s angry and it hurts too much to look at Jorah in that moment. But in the books, you can also see how close she is to tears and how close she is to changing her mind. Maybe I just missed it the show until the very end but reading the books I really started to realise that despite not wanting to be with Jorah romantically, Dany really does love him. She still thinks about him after banishing him.

And, I just wanted to add that there’s something strangely intriguing about being in Cersei’s head. When I came to her first POV chapter in ASOIAF, I just thought, “oh god, no,” but I’ve kind of started to appreciate the insight into her behaviour her POV’s provide. Most people agree that Cersei is unlikeable, and it’s arguable whether she has any redeeming qualities beyond loving her children, but whether or not she’s redeemable it’s interesting learning what makes her tick. I can’t say what happens in her head justifies the things she does, but I can at least understand her better now.

But mainly, I found reading the books satisfying because as someone who’d invested in learning the lore, histories, and theories of the Game of Thrones/ASOIAF verse, I was always excited whenever I spotted anything that connected to that knowledge. I also really liked being able to spot foreshadowing based on my that knowledge, as well as my show knowledge. Spotting the connections and foreshadowing was probably my favourite part of reading the series. There’s likely a lot I missed, and a lot I won’t even realise I missed until the book series is complete, but if/when I reread the series, I look forward to seeing it through a more knowledgeable lens.

My final point regarding the books is that as a show-watcher, as much as I don’t want to hang my hopes on a more satisfying ending from the books, I can’t deny that it’s part of the attraction. Initially it wasn’t. I read the books because I wanted to experience the journey that the books take and all the added extras, but season 8 kind of changed that. Now, I can’t deny that it would be nice to get a more fleshed out ending. But I hope that I’ve made it clear that that’s not the only reason for investing in the books. They’re just really good and deserve to be read.

But, to those of you still on the fence about reading the book series in case GRRM never completes it – and at this point, I wouldn’t be mad at him for not finishing just to spite the readers who keep contemplating his death – remember that there’s always fanfiction.

Final thoughts on the show

It’s been about a month now since Game of Thrones finished, so I thought I’d try to reassess my feeling immediately following the finale.

After doing a bit of thinking on it, I’ve decided that I stand by what I said in my previous post. I still love the show.

Yes, the show had some…unfulfilled potential as far as the ending was concerned. But that doesn’t undo the years of great TV that the show gave me. And there are great moments and scenes in the series that I’ll always remember and probably want to rewatch in the future.

So, yeah. I think that’s all I have to say on that.

Whether you’re a book reader or show-watcher, and whether or not my post persuaded to you to become the former, thanks for reading it.

8 thoughts on “And now my wait begins (or, on reading A Song of Ice and Fire)”